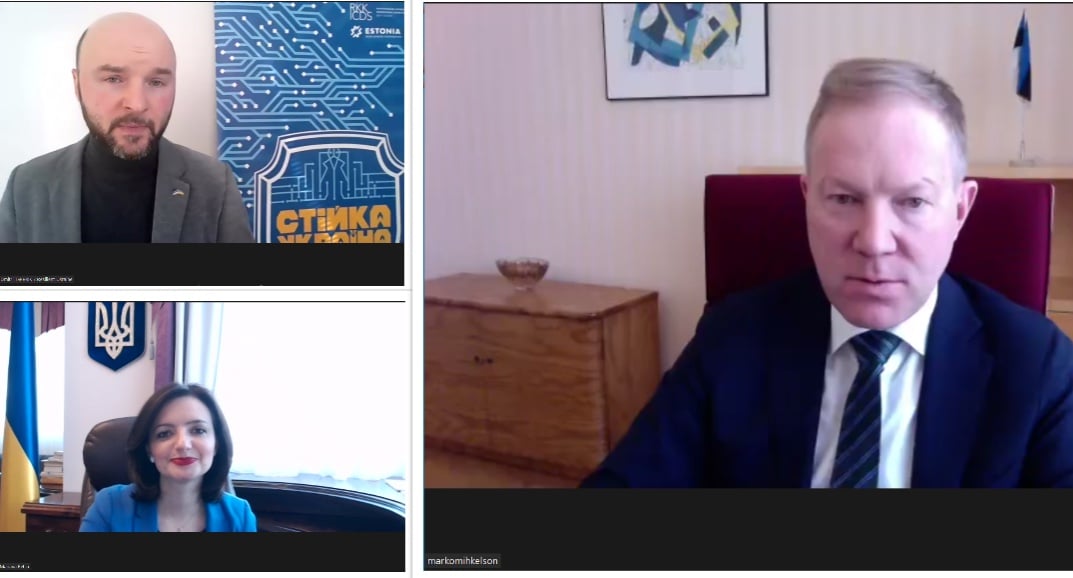 More than 60 participants followed the online event, among others Ukrainian and Estonian officials, journalists, and public experts.

H.E. Mariana Betsa, Ambassador Extraordinary and Plenipotentiary of Ukraine to Estonia opened the discussion by calling on Ukraine's international partners to strengthen the sanctions for the annexation of Crimea. "We are very grateful to all our partners who, for so many years, have managed to maintain the sanctions mechanism on the Russian Federation. We deem that they are really working. But we need to strengthen them - at the individual level and at the level of international organizations as well," proposed the ambassador.

Mr. Marko Mihkelson, Chair of the Foreign Affairs Committee of the Estonian parliament, for his part assured that Estonia won’t not recognize the annexation of Crimea. "Estonia is the country that raises the issue of Crimea at the international level. But it is also very important what we do on the governmental, parliamentary and non-governmental level," noticed the parliamentarian. Mr. Mihkelson supported the establishment of the Crimean Platform. "It was a timely and important decision. Estonia will make a positive input to the work of the Platform. We should work together to keep the topic on the radar," he said.

His colleague Mr. Gert Antsu, former Ambassador of Estonia to Ukraine and the Director of the Estonian Centre of Eastern Partnership said that his organization is working fruitfully in Kherson region. "One of our areas of work is the fight against disinformation. Unfortunately, the enemy knows how to create and spread myths and find a receptive audience. Our Estonian experts, together with Ukrainian colleagues, teach how to recognize disinformation. We train local journalists, because ordinary people still trust this profession more," told Mr. Antsu.

According to Mr. Ihor Yaremenko, Deputy Minister for Reintegration of the Temporary Occupied Territories of Ukraine, the Russian Federation regularly obstructs Ukrainian broadcasting to Crimea. "The occupation authorities are doing their best to separate Crimea from Ukraine’s information space. They try to stop the broadcasting of our TV and radio channels to Crimea; they try to limit the Internet connection and contacts through social media networks. We are doing our best to remedy the situation: we are trying to support the broadcasting of TV and radio channels, the Cabinet of Ministers has recently adopted a degree allowing our ministry to provide financial support to TV and radio broadcasters", - said Yaremenko.

Dr. Evhen Tsybulenko, Law professor at Tallinn University of Technology, noted that Russia is actively militarizing the peninsula and deploying members of the Russian military and security forces to Crimea. "When the occupation began in 2014, the population of the peninsula was fewer than 2 million people. Now it is more than 2 million 500 thousand people, which means that the population has increased by almost a quarter. The population increase is also due to the relocation of the Russian civilian population to the occupied territories, which is a direct violation of international humanitarian law. But these are official Rosstat data, which differ from reality because Russia constantly falsifies the information. Moreover, these data do not take into account military personnel and representatives of law enforcement agencies. Correspondingly, the population is now much larger, and that completely changes the demographic landscape in Crimea." - noted Dr. Tsybulenko.

Mr. Volodymyr Prytula, Head of RFE/RL (Krym.Realii), highlighted the contemplating of situation reassessment by the Crimeans. "We are constantly in touch with our colleagues in Crimea and our audience there. They say that there are complex social processes of sobering up and realization that something went wrong seven years ago on the peninsula. But the lack of full, reliable information affects the Crimeans, disorients them, and complicates their lives," explained Prytula.

Mr. Ibrahim Suleimanov, Head of Kherson city Majlis, Development Director of ‘Kuresh’ Crimean Tartar Cultural Centre noted that certain Ukrainians come to the occupied Crimea to obtain the Russian citizenship. "Among some Ukrainians who come to the occupied Crimea, there is some demand for the Russian citizenship. Many of them have real estate on the territory of Crimea. Most of these people are public officials: judges, prosecutors. Some of them may have access to state secrets. In my opinion, this issue should be urgently resolved at the legislative level. It is necessary to identify such people and prohibit them from holding public office because they become dependent, vulnerable, and toxic", - said Mr. Ibrahim.

The online discussion was moderated by Mr. Dmitri Teperik, ICDS Chief Executive (Estonia) / Programme Director ‘Resilient Ukraine’, who drew the participants' attention to the long-term consequences of the occupation: “There is no doubt that seven years of the repressive regime will leave a mark on the education and worldview of the young generations on the peninsula, and this must be taken into account now while strategies for the de-occupation of Crimea." – believes Teperik.

The ‘Resilient Ukraine’ programme realises its activities in the regions close to the temporarily occupied Crimea, namely in Kherson, Mykolaiv, Odesa, and Zaporizhzhia, and plans variousevents encompassing analytical and educational work for improving situational awareness about existing vulnerabilities and new threats on the regional level..

Click here to watch the full version of the discussion.

From 3 to 4 November, the "Resilient Ukraine" programme held cross-sectoral crisis simulation exercises in the city of Uzhhorod to strengthen resilience at the local and regional levels.